Create an xml file and name it as configure.xml. Now type the code as shown in following listing:

Leave MainActivty.java and activity_main.xml file as they appear after creating the project. Now open your emulator and run the application. After launching the project you will be prompted with the emulator screen as shown in the snapshot:

Figure - After launching the project

You might be thinking why the project is showing a Hello World text. This is our main activity. We are interested in the provider output. Go back to main menu. Press the home screen and you will be prompted like a screen as shown in following snapshot:

Figure -  after pressing the Home Screen

Now click on widget and select your project name. You would de prompted with screens as shown in following snapshots:

Figure this is your Android app widget’s configuration

After pressing the button you will be moved to the home screen. And you are done. See your widget on home screen. If you cannot see the widget then go back to AppWidetProvider Info metadata and change width and height and run again. There are certain guidelines for designing a widget. You can check them on the official site.

At last, we are done with widgets. Thank God!! And Congratulations we are done.

Generally, our widgets are embedded on home screen. If you want to create a similar application which hosts the app widgets then it has to be an App Widget Host. Let us have a glance on the key concepts. 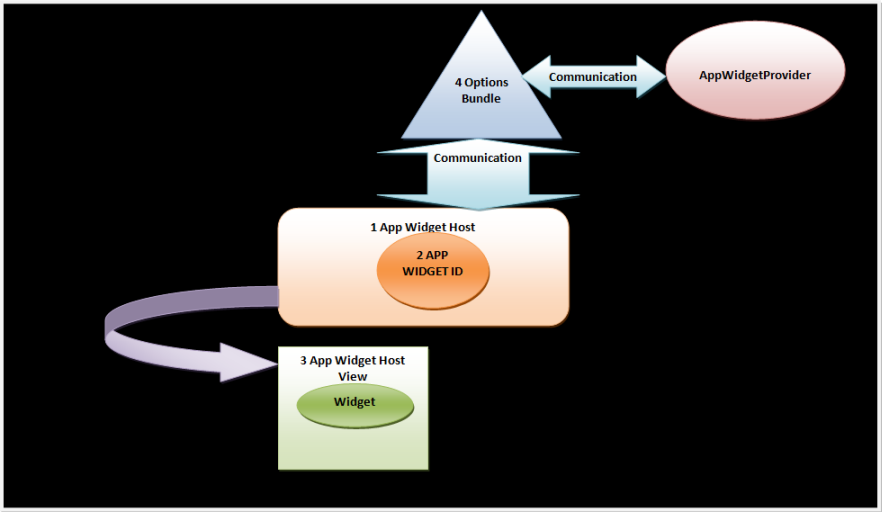 Let us wind up widgets before it gets too complicated for us. Hope you enjoyed widget app programming. keep practicing. See you with something new in the next section. Thank you.Happy App Developing!!