ZooKeeper is all about implementing distributed system using Hadoop. If one sender and receiver are communicating and due to some reason network fails then following things would happen –

Following are the characteristics of ZooKeeper –

Zookeeper is Hadoop’s coordination service which is distributed in nature. Zookeeper provides a platform where processes that do not know about each other’s presence and existence come together and get to know each other. Even they come to know about their network detail.

Performance wise Zookeeper is really very good. Zookeeper was created at Yahoo, they have tested its performance and found benchmark performance of per second 10,000 operations. Note that this was for the WRITE kind of workload and opposite to this where workload is of READ in nature, the throughput s very high.

Make sure that JAVA 6 is there in your machine since ZooKeeper requires it to run.

Download a ZooKeeper release from Apache website. Unzip the file at your suitable directory. ZooKeeper provides some binaries.

Before actually running the ZooKeeper service. As a convention this file is called as the zoo.cfg. We need to set some JAVA properties in the file, these are –

Following are the other “four letter word” commands for managing ZooKeeper ->

9.3 Understand the Basics of ZooKeeper

Suppose there is a network application running where a client dealing with multiple servers and each server is responsible for some of the services. The requirement is that client should be able to access a particular so that to access particular service. The biggest challenge in is that we do not have servers listing in the group. If we keep all list in a single server node then it would become a single point of failure and we definitely don’t want to do that. Our requirement is that we always want this list to be highly available. Suppose a server fails then we want a standard mechanism for removing a failed server from the network as the failed server cannot remove itself. Note that here we are talking about an active data structure which is distributed in nature. We want a standard mechanism to automate the things and take decision based on the occurrence of some event.

The biggest thing that Zookeeper offers is as it provides all these sorts of services and it makes Zookeeper unique in nature, highly performant and efficient in working.

Another way of understand Zookeeper is to imagine it as a file system which is high available in nature. It does not have files as well as directories but support a unique node based concept known as znode. It acts as a file which is a container to keep the data along with this is also acts as directory where it maintains or contains other znode information. Actually znode prepares a namespace which is hierarchical in nature.

In znode, membership list gets created in a very unique and natural way. Very first it creates a parent znode that has the group name followed by child znode which includes the group member’s name.

In the entire Hadoop’s Eco System the administrative part takes care by ZooKeeper. It remains the part of entire client server network and perform administration. ZooKeeper has a concept of ZNODE.

Let us have look at below example where we won’t be storing data in any of the znodes. Example => 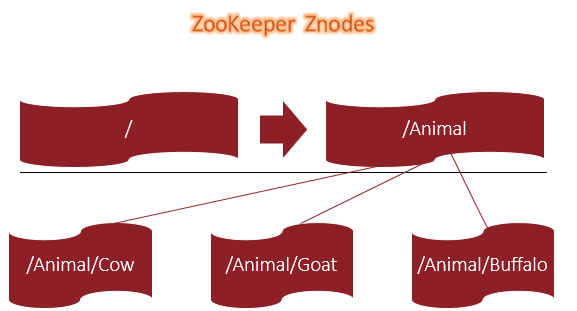