Data manipulation is necessary with many operations in SQL server. Several database objects require manipulation of data. The trigger allows user to implement the data manipulation. A trigger is a set of SQL statements that are activated in response to certain actions.

The data integrity is ensured with triggers in SQL server for data manipulation. A trigger is a stored procedure for executing in response to certain events.

In SQL Server, there are several types data manipulation operations. The following trigger types are used in SQL Server.

A DML trigger is used when the tables are affected by the DML statements, as INSERT, UPDATE and DELETE. They help user in maintaining the consistent, reliable, and proper data in the tables.

The characteristics of the DML trigger are as shown below:

1) They do not return any data to the user

2) The incorrect, inconsistent and unauthorized changes are restricted by the user

3) They cannot be explicitly invoked or executed

User fires a trigger in response to the INSERT, DELETE and UPDATE statements. Two temporary tables are created which are known as magic tables. They are known as inserted or deleted. The structure of these tables is similar to the database tables.

The DML triggers are further distinguished as

The trigger is fired when the attempt is made to insert a row in the trigger table. After the INSERT statement is executed the new row is added to the Inserted table.

It is fired when the attempt is made to delete the row from the trigger table. The deleted rows are added to the Deleted table. There are no common rows between deleted and database table.

The DELETE trigger is implemented in three ways as mentioned below:

a) The cascade method: It is used to delete the corresponding records from the dependent table when the record is deleted from the master table

b) The restrict method: It restricts the deletion of records from the master table if the related records are present in the dependent table.

c) The nullify method: It is used to nullify the values in the specified columns of the dependent tables whenever a record is deleted from the master table.

The DDL triggers are fired in response to the DDL statements as CREATE TABLE and ALTER TABLE. The task as database auditing is performed by the DDL trigger. DDL operations can contain creation of table or view, modification of a table or procedure.

Nested triggers are fired due to the actions of other triggers. DML and DDL triggers can be nested while performing an action of initiating another trigger. Consider an example of DELETE trigger on the Department table deleted the corresponding records of employee table and the DELETE trigger on the Employee table inserts those deleted employee records in the EmpHistory table.

When a trigger is fired and actions are performed causing the same trigger to fire again. The trigger is known as direct recursive trigger.

The following diagram shows the execution of the direct recursive trigger. 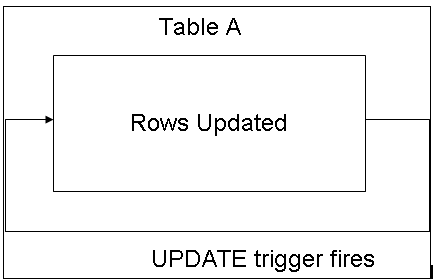 The following figure shows the execution of indirect recursive trigger. 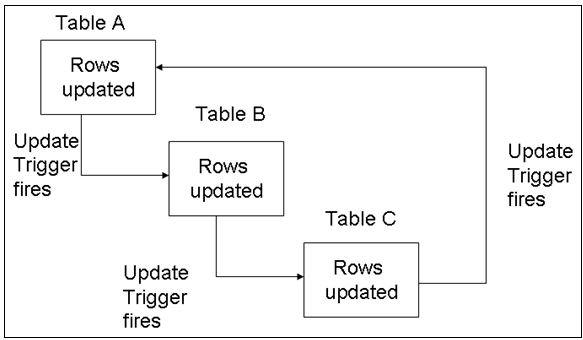 The CREATE TRIGGER statement is used to create the trigger. The syntax for creating trigger is as shown below: 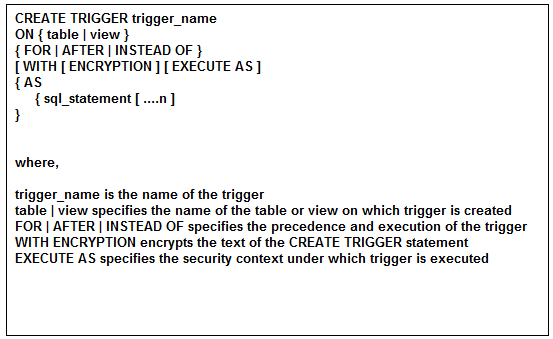 The example of create trigger is demonstrated below:

create trigger tr1 on empholiday1
after update as
begin

The following statement is used to display the data inserted into the magic table.

create trigger trg2 on empholiday1
after update as

The after update trigger is created on the empholiday1 table. When the trigger is fired, it is executed and displays the previous values and the updates values.

Execute the following UPDATE statement on the empholiday1 table.


if ( @ContactID! = 1234)
begin
print ‘ The ContactID is not correct’
rollback transaction
end

An UPDATE trigger is fired when user needs to update the records in the trigger table.

Consider the following statement is used to UPDATE Trigger.

Creating an AFTER Trigger

An AFTER Trigger is used when execution of DML statement. The following statement is used to execute the trigger.

The following operations can be performed on a trigger.

The syntax for the ALTER TRIGGER is as shown below:

Consider an example to modify the trgDeleteStudData used for deleting the records from the Student trigger. The following statement is used for altering the trigger.

There are requirements when user needs to delete a trigger. The DROP TRIGGER statement is used to delete the trigger.

The syntax for deleting a trigger is as shown below:

trigger is the name of the trigger to be deleted.

The following statement is used to drop the trgDeleteStudData.

User needs to prevent the execution of a trigger for some operations on a table. Once the trigger is disabled, it will not be executed until it is enabled by the user. The trigger is not deleted, but it is present in the database.

SQL Server provides the DISABLE TRIGGER statement to disable the trigger. The syntax for disabling a trigger is as shown below:

The example demonstrating the disabling of trigger is as shown below:

User can enable the disabled trigger by using the ENABLE TRIGGER statement. The syntax for enabling the trigger is as shown below:

The following example is used to enable the trigger.