07 - Work with the Device in Phonegap

Get Information about the Device and Network Connectivity

Mobile app developers also might have to check frequently whether the network is present. PhoneGap includes a Connection object that holds information about the device’s connection. The navigator.network interface includes this object. The connection object offers a property named type which returns information about the active network connection. The type property returns one of the following values (constants):

So, you can decide the type of the connection based on the value returned by navigator.network.connection.type.

Let’s create a mobile app for iOS platform this time. So, first open the terminal window and point to the ios/bin folder by entering the following command:

cd /Users/apple/Documents/MobileAppDevelopment/phonegap-2.9.0/lib/ios/bin (Make sure that path to your PhoneGap folder is specified correctly)

Enter the following command to create a project named AndroidMultiScreens on the desktop.

Add the following line inside the <body> tag.

Add the following lines of code inside the <head> section:

Here, we have collected all the required information in a variable named output and displayed that value within our div element.

Save the index.html file and run the project from the XCode environment. You can select any simulator you want. You might get a screen like this:

We are not getting correct information for the first two items because we are not running this app on a real device, but only on a simulator. I have just hidden the UUID value which you will be able to see clearly when you run the project.

Next, let us try to get information about the network. Add the following lines of code just above the line document.getElementById("result").innerHTML = output; (within the init method).

Here we have used switch case statement to store friendly display messages based on the type of the network connection. At the end of the above lines of code, we will have the information to be displayed in the disp variable. So, modify the line that displays the output as follows:

(Previously it was document.getElementById("result").innerHTML = output;)

Now save the index.html file and then run the application from the XCode environment. If you are not connected to any network, then you might get an output like this: 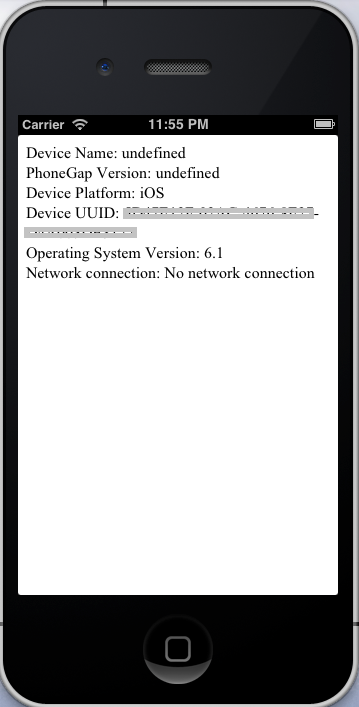 I run the app again after connecting to my WiFi network and I got the following output. 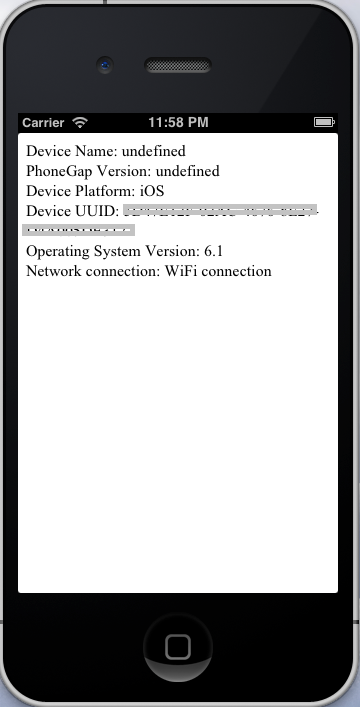 In this tutorial, we have created an app that collects information about the device and network connectivity and displays it to the user. You might need this kind of information in many situations to make your app more user-friendly and effective.