02 – What is a Database Management System

DBMS came to rescue us from the pitfalls that were highlighted in the previous chapter. All the cons of having data in the file systems were solved by having them in a DBMS – the database management systems. 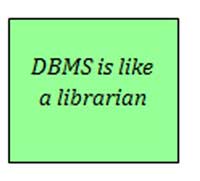 Another way to think of the DBMS is to compare it to a librarian. Some of the past journals have been archived. If you allow everyone to go into the archive room then it becomes messy. So if you want something then you ask the librarian. She asks you to wait, goes into the archive room and gives what you asked for. If there are many people then she works on a ‘first come first served basis’. If two people ask for the same material then she asks the second person to wait. She kind of puts a ‘lock’ on the material. It is not available for others.

So this – in a nutshell - is what the DBMS is all about. It manages the Databases. There is only one problem. The librarian understands only one language. That language is SQL - The standard or structured query language.

I have explained some advanced concepts by way of this simple example. ‘Locking’ is one such concept. If one person has taken a particular piece of data then the DBMS puts a lock on it. Until that person finishes his work on that piece of data – it is not available for others to see. Because if they see – they might see a half-baked cookie. This is one job of the DBMS.

The only language this librarian understands is SQL –standard (structured) query language. A database query language, which is covered in a separate tutorial. 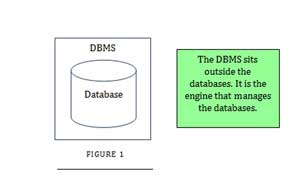 Characteristics of a DBMS

Time has come to specify formally the characteristics of a DBMS that we have been discussing:

The data manipulation in a database is carried out in the form of transactions. The concept of Transactions help us to understand completeness. Just like the accounting transactions – where you debit one account and credit another account for a single transaction for completeness. There is also a Two stage commit process where each transaction is first written to the database and then ‘committed’ to it permanently. IF you are unhappy with the transaction you can ‘rollback’ the transaction. .i.e. undo the change you did before it is written permanently to the database. More on this later. (You must also understand that some of the modern DBMS systems these concepts are very blurred. For e.g. Oracle’s concept of Flashback queries.)

Because databases uses the concept of transaction the data in the database is consistent. For example if you transfer 500packets of milk powder from one warehouse in Boston to another in Lowell you need to reduce 500packets from Boston warehouse and increase 500 packets to the Lowell warehouse. DBMS makes sure that both of these has to be done consistently. For example what happens if there is a power failure after you reduce the Boston stock before you add to the Lowell stock? The concept of transactions and two stage commit allows us to be consistent. You only commit the transaction once it is complete. i.e. after you reduce and add to the relevant warehouses – only then you commie – you make the changes permanent to the database. So if there is a power failure after you reduce the stock and before you increase the other – since it is not committed i.e. not made permanent – the whole transaction will get reversed. You can run reduce and add later when the power comes.

A DBMS must be able to manage multiple users at the same time. And treat each user as if he was the only user on this earth. How I wish all my suppliers treat me like that! However a user might be notified of another user if both are working on the same resource (for example in case of a deadlock – more on this later!)

Atomic - transactions are atomic. They are like some eccentric men. They work on all or nothing basis. All parts of a transaction get committed or nothing gets committed. As I explained earlier in the consistency section.

Consistency – already explained. The customary definition is that transactions transform the database from one correct state to another – it may not have the intermediate states.

Isolation - there may be many users running many transactions all at the same time – concurrent transactions . But each transaction is isolated from each other until it is fully committed.

Durability – once the changes are committed it is permanently held in the database until is changed by the user.

DBMS provides security at different and all levels to make sure that there is no authorized access. Security can be enforced at the Database level, Table Level, Row Level and Colum Level. It is like having a security guard at the main gate, then at the door then at the hall and finally near the dining table!

Met a Data is the data about data. Another customary definition. Since the amount of data is vast – the DBMS should have some data for its own use. This data would help the DBMS to see how much data there exists in a particular table. How much of the allocated storage has actually been used. As you see – this kind of data will enable DBMS to manage the its databases effectively.

So the some of the Meta data which was originally meant for the DBMS was shared for the humans. So the answer to the famous interview question ‘how would you find out how many rows are there in the table?’ is not I will query the table (if you know sql – select count(*) from table) but rather I will query the meta data – the data which contain data about data.

A Database is a collection of related data. It is organized for easy retrieval and optimal storage. A database is typically managed by a DBMS. And a DBMS can manage many databases. A database is created for a system.

Let’s understand this through an example. You can create a database for a customer relationship management system (CRM). So a database typically is dedicated for one system. While a database technically will allow you to keep data about other things also it is not a recommended practice. In the CRM example you can keep data about your stock control system in the same database. However it becomes messy.

So now even if we limit the amount and type of data that we are going to keep by saying that one database should typically have data about one system we still are faced with a problem. There is too much data. In the CRM system we need to keep customer data. The number of complaints the customers make. The number of times we contact the customers. And if there is anything to be done – who is supposed to do that and how to keep track of them.

Each of these entities has attributes. A customer has a name, has an age, has an address. Each of those attributes has a value. Typically called the attribute-value pair – this is no rocket science!
See the diagram below for illustration. 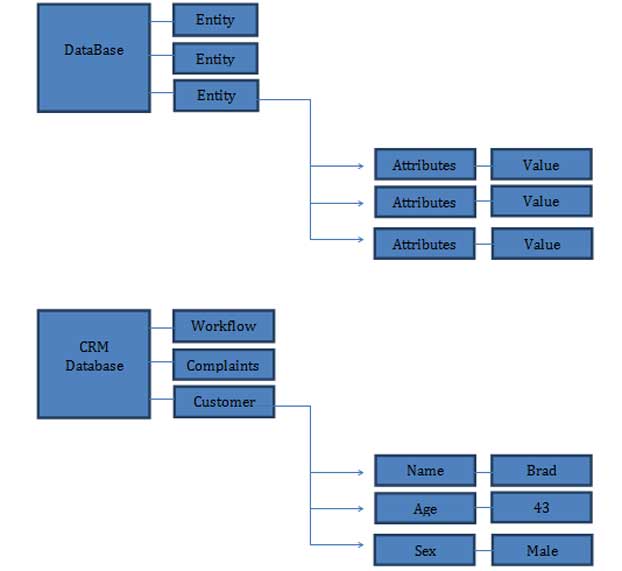 I have only shown the attributes of the customer each of entities also have attributes.

While we will not be going into the details this model is based on the mathematical set theory. So is the database language SQL.

You can read data from a table, you write data to a table you can update a table and delete data from the table. Entities are simply concepts which map to tables.

If you were a thinking like me you would be confused about one important aspect – Isn’t the tables the same thing as files – the flat files? Well, NO! For one thing tables are stored in a database which in turn is managed by the DBMS. For another thing the table is simply our perception. If you scan the hard disk you will not find any two dimensional structures called tables. But files will be visible in the hard disk. In one way tables are like the longitudes and latitudes. We know that they don’t really exist. But if say 38.8951° N, 77.0367° W you know that it is Washington DC. IT is not that the longitudes and latitudes are written over Washington DC. But they help!

We will be looking at Entities when we look at the Logical and Physical Design of databases in another chapter.

That brings us to an important distinction – between a data model and its implementation. Tables, Attributes etc. form the basis of a data model. Or the Logical Model. Then the data is kept on the hard disk as files, indexes etc. this defines the Implementation. Or the Physical Model. The users should be aware of the Logical data Model, whereas they ideally should not be worried about the physical model. While most of the tasks related to the physical model are handled by the DBMS itself some of the tasks can be carried out by the DBA – the Database Administrator.

So there is actually data independence. The physical and logical layers are independent of each other. This allows us to copy the database from one computer to another or to change underlying the hard disk or storage mechanism.